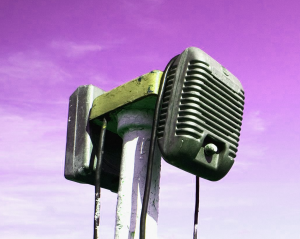 Drive In Movies are a fantastic experience and nobody does it better than Moonbeamers.  Brilliant for those who want to get a feel of the classic 1950’s Drive Ins that were so popular in the USA or simply for a fun and different way to watch a film.

For event organisers providing quality sound is an immensely important part of bringing a quality experience to your attendees. History has seen the end of a few solutions over the years, here we examine the historical and current solutions in use.  Currently the only professional solution to bring top quality sound to a large number of cars is to use FM Radio Broadcasting but for event organisers it is important that you understand the practicalities, the technical requirements and how you could find yourself breaking the law and exposing yourself to huge fines if you do not research properly.

In days gone by there have been a number of different methods of getting sound to your car.  In the early days the sound came from large speakers next to the screen.  Of course, you would have to have your windows open to hear and in 1950’s American summer that sounds pretty good.   Would this method cut it in the UK today?  Definitely not. We’re so used to hearing good, clear sound with technology being what it is, listening to a movie soundtrack muffled and buffeted by a car park full of cars and your own windscreen would result in an experience that would leave a lot to be desired.  Listening to a movie in your car this way would become hard work and ruin the experience. The weather here in England never does us many favours so leaving windows open presents an additional issue.  It must have been fantastic when Drive In Movies first appeared in the 1930’s but 90 years later it really isn’t going to cut the mustard.

The classic and iconic Drive In Movie speaker system

Then came the traditional and classic Drive In speaker set up shown in the picture above, cables were routed underground to feed posts which sat in between cars.  Each post had a pair of speakers, one of which you would pull into your car to listen.  They’re iconic and evoke the feeling of the classic Drive In Cinema in its heyday.  So would this method be suitable in the UK today?  No, it’s not feasible today.  Imagine having to run cables to every car at your event, even if you laid them over ground rather than under this just isn’t feasible. Oh and by the way, where would you source the speaker systems? That’s a non starter too!

Clip On … forget it!

Another method used a cable which clipped onto the car radio aerial to supply the signal.  This would overpower any incoming frequencies and use the radio and speakers in your car to receive sound. I’m told from a friend that worked with a system like this that when you attached the clip there was an almighty spark often giving a shock. Is this a good idea for a modern Drive in Cinema?  This doesn’t sound feasible or particularly safe, not only would it require much cabling, finding the kit for this would be very difficult.  Crazy idea!

Bluetooth … not a chance!

Bluetooth!  Why not use Bluetooth?  We all use it on our phones with our wireless headphones, it has to work doesn’t it?  Well, actually in this case there are many problems.   Bluetooth is generally used as a short range method of communication but Class 1 Bluetooth can do far longer distances than the more commonplace classes 2 and 3.  The problems are pairing multiple devices and latency.  There is no way that you can send sound from a Bluetooth device across a packed car pack and not experience latency resulting in lip sync issues and in turn resulting in the worst possible Drive In sound experience.  Stop there,  it’s a no go!  If a Drive In Movie company says that they use a Bluetooth system, well, bless them for they know not what they say (in other words, they don’t know what they are talking about). Read on and I’ll explain.

FM Radio Broadcasting used by professional Drive in Cinema companies is the standard to aspire to but there is one other method that can be used. Using the same technology used in wireless microphones or wireless headphones (Not Bluetooth ones!) a low power signal is transmitted to small receivers which are then plugged into a separate speaker.  The signal being transmitted is actually a low power radio signal but not the type you could tune a standard radio into.  It is sent on a band/frequency reserved only for devices such as the wireless microphones and headphones previously mentioned.  So how does this system fare for Drive In Movies?  This system used correctly can service a small Drive In Movie, we’d say around 50-60 cars positioned in a compact way.  Bear in mind this is a low power signal not designed to stretch the length of a car park, it is actually meant for such applications as allowing a singer the freedom to roam the length of a stage or give a TV presenter the ability to move around the studio with a lapel mic attached to a beltpack.

The frequencies it uses are common to all users of that type of equipment so somebody with a wireless mic or maybe a silent disco headphone party in the same vicinity could and most likely would cause issues for your event.  The kit itself is a rather clumsy ‘Heath Robinson’ set up.  You would need to supply each viewer with the battery powered receiver, the cable and a battery powered speaker to put on their dashboard.  These speakers are often Bluetooth style speakers but they are not connected using the Bluetooth protocol they are connected to the receiver using the auxiliary (analogue) jack input, this is where the confusion that I mentioned in the previous section arises.

You’d have to issue the kits on entry to your event and devise a suitable system for return at the end of the night. In our experience not all of your viewers will have respect for your equipment. We’ve heard stories of people dumping them by the side of the car and people driving off with the equipment never to be seen again.  In a world with Covid 19 there is also the problem of passing the virus along with the equipment issued or virus being passed back on return and the smaller issue of dealing with the exchange while social distancing. Cost wise this sort of set up doesn’t come cheap and wouldn’t be the sort of thing that you’d invest in unless you were doing regular Drive In events and to be honest, if you were doing regular Drive In events, you’d be using an FM Radio Broadcast as we do here at Moonbeamers Limited. All in all this is a passable but not ideal solution for providing sound at small Drive In Movies.

Any professional Drive In Movie company worth their salt will be using FM transmission to deliver quality sound to their attendees. Using professional equipment it gives your viewers the ability to tune their car radios into the broadcast and get crystal clear, top quality sound. There is no fear of loss of signal over the length of a car park and there is no fear of interference from other devices using the same frequencies as you have your very own frequency allocated to you by the authorities that nobody else is permitted to use.  There is no device to give to attendees, they just tune in with their car radio and enjoy.  Even the most standard car stereos these days sound just awesome. Most importantly you will need a radio broadcast licence awarded to you by Ofcom. This can be a costly, lengthy and sometimes fruitless application. It takes a minimum of right weeks to obtain. You pay your money, justify your case and take your chance.  Applications are not always authorised (but you won’t get the hundreds back that you have paid in application fee), after all you are asking to start your own radio station here!  Area is an important factor, there is much competition for frequencies in the cities, sometimes the frequencies just aren’t available or suitable.  If you are in a rural area you may have a better chance.  If you are lucky enough to be granted a licence then you will need quality equipment which has to be authorised by Ofcom.  If you think you can get a cheap chinese transmitter from eBay then you’re out of luck. Not only would they not be on Ofcom’s equipment list, they are actually incredibly poor quality.  You’ll be looking at spending a nice few thousand pounds for appropriate equipment.

The most important thing to be aware of here is that FM Broadcast without a licence is a criminal offence.  It carries a fine of £5000 in a magistrates court, unlimited in a crown court and if convicted you can receive up to two years in prison!   All granted licences are listed on Ofcom’s website so it is very easy to see who has a licence and who doesn’t. As soon as you turn that FM transmitter on, unless you are fully licensed, you are liable and should expect a knock on the door.

Nope. Latency/lip syncing issues, not to mention costs and licensing!